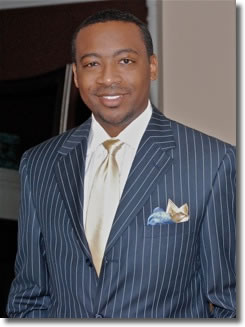 Elder Cameron James was born, in Huntsville Alabama, into a family of singers. Both his mom and dad sang in church and in a gospel group they formed. The group ministered for 18 years traveling all over the country. Elder Cameron began playing piano/keyboard at the age of 10 and shortly thereafter he joined his parent’s band as the keyboardist. In high school is where he began writing, producing and publishing music. He graduated from J.O. Johnson High School in 1996 and played/sang for their Gospel Choir.

As a self-taught musician he began playing professionally right out of high school; traveling and playing for gospel artist. Elder Cameron attended college at the University of Alabama in Birmingham (UAB), where he graduated with an honors degree in Economics. While attending UAB, he was one of the first class of students chosen to be a musician for the university’s Gospel Choir. Along with serving as a musician for the UAB choir, he also led songs. Since then, Elder Cameron’s musical gifts have inspired him to write and produce several songs. He served as an ordained minister and a musician at the Guiding Light Church for 12 years.  Currently, he is the Minister of Music for HWOM where he has served faithfully for over 4 years. Elder Cameron’s passion is to mentor other leaders, psalmists, and musicians to render pure worship and recognize the anointed power of God through their respective gifts. It is also his desire to bring musicians across various denominations to worship one God with a unified praise.